A screw cap is a metal cap that screws onto threads on the neck of a bottle, generally with a metal skirt down the neck to resemble the traditional wine capsule (“foil”). A layer of plastic (often PVDC), cork, rubber, or other soft material is used as wad to make a seal with the mouth of the bottle. Its use as an alternative wine closure is gaining increasing support as an alternative to cork for sealing wine bottles. In markets such as Australia and New Zealand screw caps on bottles have overtaken cork to become the most common means of sealing bottles, right across the wine industry.

Compared to cork, screw caps reduce the wine faults of oxidation and of cork taint, although it is possible to find TCA contamination in a screw cap bottle. [2] Screw caps are generally perceived as easier to open. Screw caps have a much lower failure rate than cork, and in theory will allow a wine to reach the customer in perfect condition, with a minimum of bottle variation. Cork, of course, has a centuries-old tradition behind it, and there are also concerns about the impact of screw caps on the aging of those few wines that require decades to be at their best. Some argue that the slow ingress of oxygen plays a vital role in aging a wine, while others argue that this amount is almost zero in a sound cork and that any admitted oxygen is harmful.

Producers in Champagne have aged their wines under crown cap for quite some time, however, the crown cap is replaced by the traditional cork at the end of the second fermentation.[3]

The converse of oxidation is reduction, and it has been suggested[4] that screwcapped wine leads to reductive characteristics. These include a sulfur smell which in some circumstances adds a pleasant pungency to the wine, or may be distasteful. 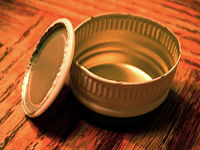 The two parts of a Stelvin-brand screwcap

The most known brand of wine screw caps is Stelvin,[citation needed] a brand developed by Rio Tinto Alcan, and now owned by Amcor. The caps have a long outside skirt, intended to resemble the traditional wine capsule (“foil”), and use plastic PVDC (Polyvinylidene chloride) as a neutral liner on the inside wadding.

The Stelvin was developed in the late 1960s and early 1970s, at the 1964 behest of Peter Wall, Production Director of the Australian Yalumba winery, working with other companies,[citation needed] and commercialized in the 1970s.[5] It was developed by French company Le Bouchage Mécanique, thence acquired by Pea-Pechiney, which became part of Alcan, then Rio Tinto Alcan and now Amcor. It was preceded as a closure by a Stelcap/cork combination (closed with cork, with a Stelcap on top): the Stelcap was also a long-skirted screw cap, but with a different inner lining (paper over cork, instead of PVDC or PVDC covered by foil-covered paper in a Stelvin).

The Stelvin cap was originally trialled in 1970 and 1971 with the Swiss wine Chasselas, which was particularly affected by cork taint, and was first used commercially in 1972 for the Swiss winery Hammel. It was adopted commercially in Australia from late 1976.[5] For noble wines, wines from the 1971/72 vintage (such as Haut-Brion) were sealed with Stelvin, then tasted in 1978, and found similar to cork-closed wines.